The Soul Sisters Retreat will be facilitated by Amal and Amany Ismail, two multi-skill therapists known as the ‘AmA’ duo. They are experienced trainers using a range of accredited healing and bodywork modalities."

Amany graduated from King Saud University’s College of Science, starting her career as a high school mathematics teacher in Riyadh. It was there that she began her work as an energy healer, having trained in several modalities including Reiki, Quantum Touch, Neuro-Linguistic Programming (NLP), as well as fitness training. Once she moved back to her hometown of Jeddah, her healing path began professionally.

​India was the start to her Yoga journey with training as a Yoga instructor, Ayurvedic massage and Panchakarma therapist. Amany later perfected Bikram Yoga under Gabrielle Raiz-Scanlon in Australia, travelling to Costa Rica where she completed her Hot Yoga Doctor training. It was in Dubai that she was introduced to an inspiring mentor, Cyntha Gonzalez who further re-directed her life course to become a counselor with studies in Trans-personal Healing and Art Therapy . As a Reiki master, trans-personal healer, Yoga instructor and Healing through nutrition facilitator, Amany brings a wealth of healing wisdom to her community locally and via her workshops and retreats worldwide.

Amal began her career as a website developer after graduating from King Saud University in Computer Science. After the birth of her first child, Amal went into child education, setting up in-home day care centres where she learned the foundations of creating a safe, loving and enriching learning environment for children. Three years later she received her Montessori Diploma, setting up Jeddah’s renowned Apple Tree Montessori School that successfully provided children with a positive education until 2015.
​
Since 2010, Amal has been deepening her studies in the holistic healing arts. From an art therapy workshop with Abyah Al-Dabbagh, she then trained under globally renowned therapist Cyntha Gonzalez in Transpersonal Healing, Art Therapy and Grieving Odyssey. Her life’s mission has evolved and now as a professional counsellor and art therapist, she runs a successful healing practice with her sister in Jeddah.

​During the healing journey she was introduced to the powerful Nia technique and flew to Germany, Switzerland and France to perfect her expertise and incorporate this movement therapy in her healing tool kit. 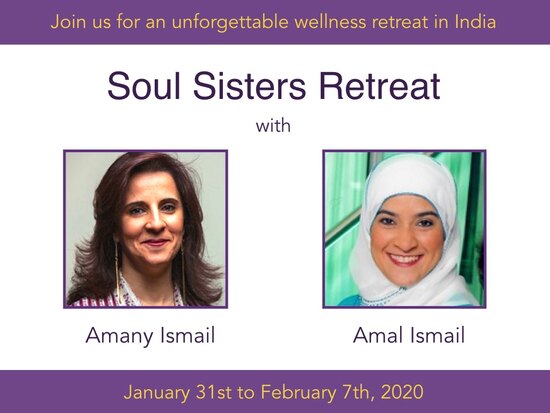 The Best Ayurveda Resort in Calicut