10 reasons to visit a yoga retreat in India

Going to a yoga retreat offers the opportunity for a digital detox. This can create much needed space in your life to focus on what’s most important: you and your health.

Yoga was developed over 5,000 years ago in India as a practice to unite the body and mind. Over the last decade, the practice of yoga has rapidly spread across the world. In the United States, for example, there is an estimated 36.7 million yoga practitioners, up from 20.4 million in 2012, according to research by the Yoga Alliance. People who practice yoga are not just practicing in yoga studios, however. Every year, India receives hundreds of thousands of tourists at yoga retreats and health resorts all over the country.

There are very few things that can cleanse and transform a person – mentally, physically, and spiritually – as going for a yoga retreat in India. Regardless of whether you’re an expert yoga practitioner or a complete beginner, going to a yoga retreat offers numerous benefits and a healthy alternative to your typical vacation in Mexico or the Caribbean. And what better place to go for a retreat than India, the birthplace of yoga and its sister science, Ayurveda.

Here’s a list of reasons why a yoga retreat in India should be your next vacation destination.

Outside of India, yoga has been adapted to suit different audiences and needs. It is often seen as an alternative to sports and a replacement of the gym. And yoga is often experienced as an aerobic workout that places emphasis on physical intensity and perspiration. However, yoga is more than physical exercise. Traditional yoga places much emphasis on breathing and breath control (pranayama), rest and relaxation between poses, and spiritual elevation. In contrast, modern yoga or yoga that has been adapted to suit studio environments tends to be more aerobic in nature, which can be intimidating and difficult for beginners.

In India, many of the yoga retreats and Ayurveda resorts offer yoga that is more traditional and less intensive. Class sizes are usually small, particularly at the more expensive yoga retreats like Carnoustie Ayurveda and Wellness Centre and Niraamaya Retreats Surya Samudra. This makes it easier for people to learn yoga and develop a personalized practice. Yoga is not a competition but a form of individual personal search. Learning yoga from traditional instructors in a low-pressure environment can be tremendously empowering and encouraging. 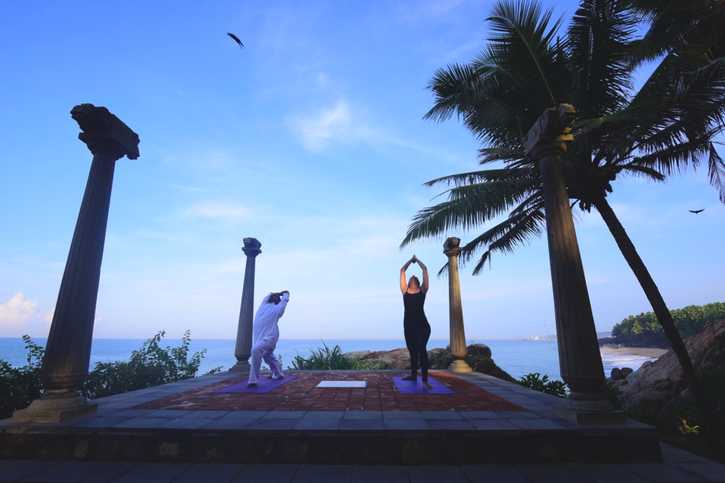 At Niraamaya Retreats (pictured above), group yoga classes tend to be small and personalized
2. Meet people from all over the world

One of the biggest benefits of going for a retreat in India is that you will meet people from all over the world. For example, the Isha Foundation held an eight-day yoga retreat in 2016 that was attended by approximately 2000 people from over 30 countries, all practicing yoga under the same roof and eating traditional vegetarian satvic food as one community. The bonding that took place among participants surely created lifelong memories and friendships. 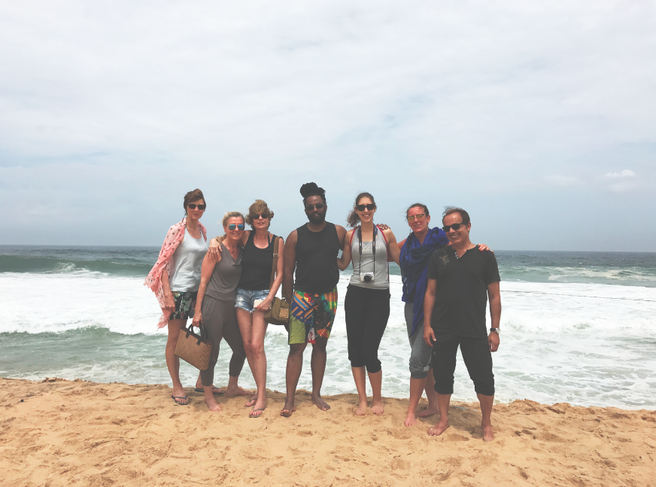 Participants in the 2017 AYU Retreat stop for a group picture during a backwater trip in Kerala
3. Experience community living

Life in the Information Age makes it possible for nearly every person on the planet to connect with every other person via the Internet. But while we are all more connected than ever before, the bonds between friends, siblings, co-workers and people in general seem to be weakening as we get caught up in information overload, divisive politics, work and family commitments, and, of course, our smart phones.

Going to a yoga retreat offers the opportunity to be part of a community of fellow travellers and seekers. Whether you are on the path to inner peace, a healthier body, spiritual growth or just plain relaxation, you are guaranteed to meet people in India from different cultures and countries who share your goals, hopes, and struggles – and, perhaps also, a love for yoga.

India is one of the oldest civilizations in the world with a history that spans several millennia. Going to a yoga retreat will expose you to different aspects of Indian culture from holistic health and delectable food to uplifting music and entertainment. Moreover, the interactions that you will have with people from different countries will offer further cultural exchanges and insights, broadening your understanding and appreciation of the world’s diversity. 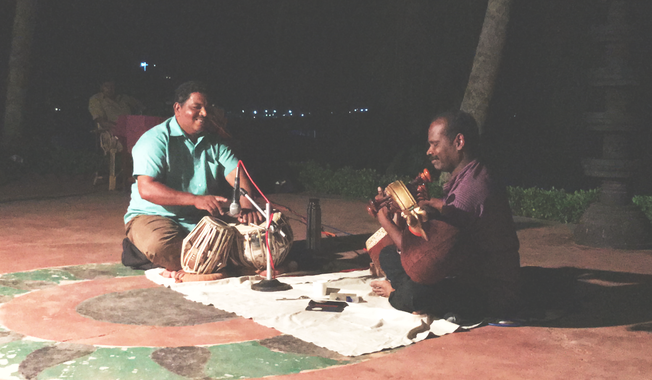 Pictured here is an evening entertainment program at Manaltheeram in Kerala
5. Escape from city life

The best yoga retreats in India tend to be located in rural communities or on the outskirts of major cities – away from traffic, noise and pollution. Participating in a yoga retreat gives you a chance to escape from the hustle and bustle of city life and the pressures of work. Although if you really want to work, you can do so because most yoga retreats offer free wifi.

If you have the opportunity to experience a backwater trip in India, which many yoga retreats offer, you will perhaps see things that you have never seen before like a parade of elephants, a band of monkeys, and villagers bathing and brushing their teeth in the river by their home.

Max Strom, an American yoga teacher and international speaker, once remarked that, “Social media is like the new white sugar of our time. The more we eat, the more we want and the worse we feel.” Whether we are talking about social media or smart phones in general, few will deny that we have an unhealthy attachment to our devices. Don’t get me wrong. Some of us need our phone for work or business and can’t get away. But that’s the problem. Even if we want to get rid of our phones, we often can’t.

Going to a yoga retreat offers the opportunity for a digital detox. This can create much needed space in your life to focus on what’s most important: you and your health.

Some yoga retreats have very limited wifi and cell phone reception. One such example is Atmantan Wellness Resort that only allows mobile phones to be used in designated areas and provides wifi only in guests’ rooms.

7. Eat healthier than ever before

Many yoga retreats in India, particularly the smaller and less commercialized Ayurveda resorts or homestays, grow their own fruits, vegetables and herbs. Some retreats make a concerted effort to offer organic, local and seasonal foods. If you are fortunate to go to one of these places, you will likely be served three healthy meals a day. 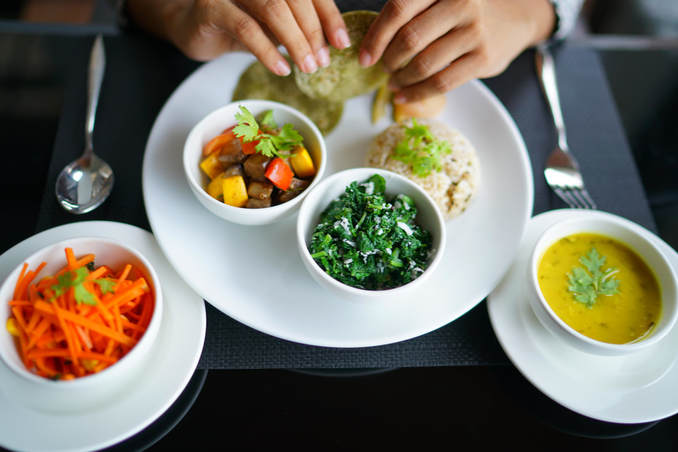 Delicious three-course meals as pictured above are served at Atmantan Wellness Resort
The vast majority of yoga retreats offer pure vegetarian cuisines only. However, all of the luxury resorts mentioned in this article above offer non-vegetarian wellness dishes alongside Indian and Ayurvedic cuisine. So if you have particular dietary needs, they can be managed. Don’t assume that you need to become a vegan or vegetarian to go to a yoga retreat in India. There is a wide range of options.

Whether you are single, married or going through a divorce, whether you are a student or a successful entrepreneur, it is hard to keep the mind free of noise and clutter. Anyone who is honest with themselves has experienced, or is experiencing, the incessant mind with its repetitive thoughts, worries, frustrations and preoccupations. Going to a yoga retreat offers the opportunity to de-clutter and clear the mind.

Abhilash Soman, an outstanding yoga teacher in Kerala, places much emphasis on breadth work or what is known as “pranayama”. He teaches his students how to control their breath through different breathing exercises. He once said to me, “Get control of your breath, you will get control over your mind.” Isn’t this what we all need?

As mentioned earlier in this article, Ayurveda is often found alongside yoga at retreats in India. They are closely related disciplines, having emerged from the ancient Indian scriptures known as the “vedas”.

Ayurveda is a form of Indian traditional medicine and arguably the oldest living medical system in the world. It is fundamentally concerned with both the prevention and treatment of ill health.  The word “Ayurveda” is comprised of two Sanskrit words: “Ayur” meaning “life” and “veda” meaning “knowledge” or “science”. Ayurveda is often thus translated as “Knowledge of Life”.

The vast majority of yoga retreats offer pure vegetarian cuisines only. However, all of the luxury resorts mentioned in this article above offer non-vegetarian wellness dishes alongside Indian and Ayurvedic cuisine. So if you have particular dietary needs, they can be managed. Don’t assume that you need to become a vegan or vegetarian to go to a yoga retreat in India. There is a wide range of options.

And last but not least, go to a yoga retreat because you deserve it. As clichéd as it sounds, life is indeed short. When you look back on your life, it won’t be the projects, deadlines and assignments that you remember, but the awe-inspiring places that you visited and the pivotal decisions you took to change your life. A wellness vacation and yoga retreat in India could be just the kind of change you need, especially if you’re feeling rundown and struggling to make time for time.
Disclaimer

The purpose of this article is to motivate and inspire, as well as to provide information about Ayurveda and yoga retreats in India. This information is not intended to diagnose any particular health ailment or to suggest a cure for any particular disorder. However, if you are interested in Ayurvedic treatment or a yoga retreat in India and would like to consult with an expert, please submit your request via our contact form  below. There is no charge for this consultation.
This article was written by independent writer and yoga enthusiast, Advaith Mohan, and edited by Alykhan Alidina, a curator of personalized yoga retreats and wellness vacations.